GatorPipes were developed over a three year period and involved extensive testing and incremental improvements to yield the perfect pipe that has taken everything into account when enjoying or medically benefitting from smokable flower.

Facilitates the Best Taste and Flavor 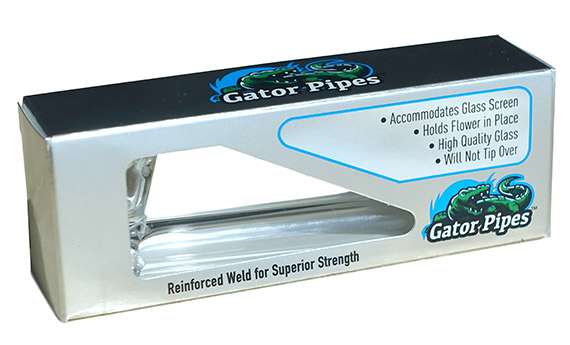 On the other hand, there is nowhere for sticky and smelly residue to accumulate in the single walled Gatorpipe.  One can blow it out after use or use a paperclip to simply pull any unwanted resin out.  There is a reinforced weld between the bowl and the stem so it can be vigorously tapped out after each bowl.

The pipe is light, yet very durable. This is due to the single wall construction of the pipe coupled with the reinforcing glass weld where the bowl attaches to the stem.

The Gatorpipe is specifically designed to not include a carb.  While carbs make a lot of sense with really large pipes or water pipes, they do not make sense to have on small pipes.  The purpose of a carb is to facilitate a larger hit by quickly clearing the smoke in the chamber.  In a small pipe, there is not a lot of smoke to hit at once.  In fact, the only thing one accomplishes with a carb on a small pipe is burning their thumb when lighting the pipe.

Easy to Clean
– Tap out, it won’t break!
– Blow out after use
– Use a paperclip to easily clean anytime

How to Smoke the Gatorpipe

Gatorpipes are designed to optimize the cannabis flower and concentrate smoking experience.

My favorite way to smoke flower is to smoke the flower as it is (unmolested or ground up) and through glass. I prefer to smoke the bud the way it naturally presents with all the included compounds present.  I try to be efficient with my time and spend as little time as possible preparing the flower to smoke. I prefer to have as little paraphernalia as possible and do not like smoking with a screen.  I also like to smoke a fresh bowl each time and can adjust the quantity I am ingesting at any given time when I use a pipe.  The Gatorpipe facilitates all this.


The way to optimally use the pipe is to literally jam a bud in the bowl and press it flat with your thumb. Then make sure you point the pipe down when you hit it. If you point it up or horizontal, you have a good chance of inhaling ash toward the end of the pipe.  When toked properly, the Gatorpipe will produce a better hit than any other pipe you have smoked from.


You can also break a bud in half and put it in the bowl, then add a layer of kief or other concentrate, then put the rest of the bud on top and press flat. This is a great way to ingest concentrates smoothly, efficiently, and quickly. You can also use a screen in it to smoke ground flower if you must